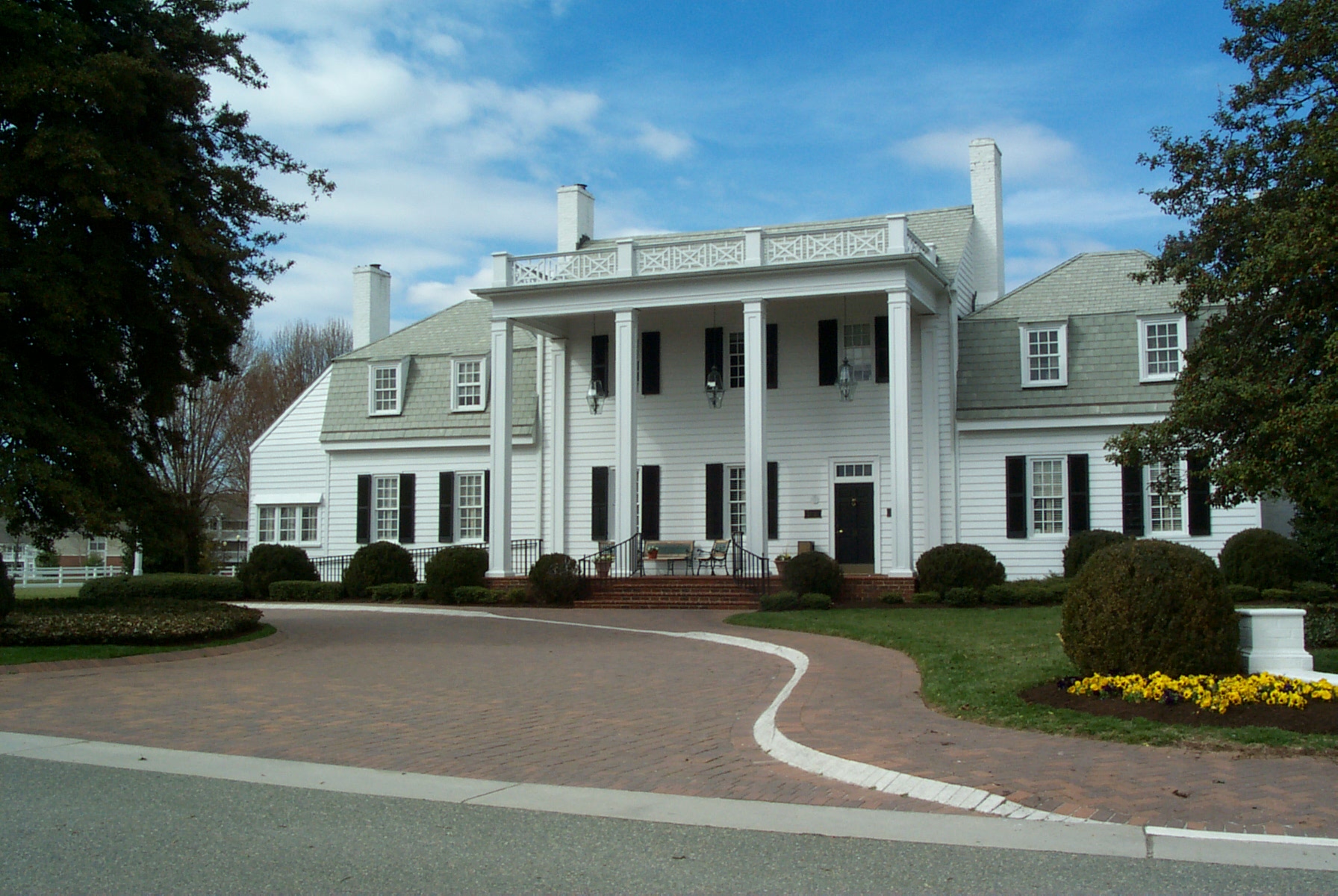 Located at 11500 W. Huguenot Road
The house originally built in 1732, underwent expansion in 1824 when wings were added to the house. In 1840, the house was sold to a French bachelor by the name of Robiou. During the Civil War the house was used as headquarters by General A.P. Hill and was used as a hospital for Confederate soldiers. After the war residents of the house changed the name to Belvidere then Alandale. The house is now used as a Ruth’s Chris steakhouse.

The village, designated National Historic District, has more than 30 buildings from the late 19th and early 20th century. The annual Victorian Day Parade and Festival is typically scheduled in May on the Saturday before Mother’s Day. Other programs from the Bon Air Historical Society are held throughout the year, including picnics in September and June, a Christmas Social and a Valentine’s Day Social. 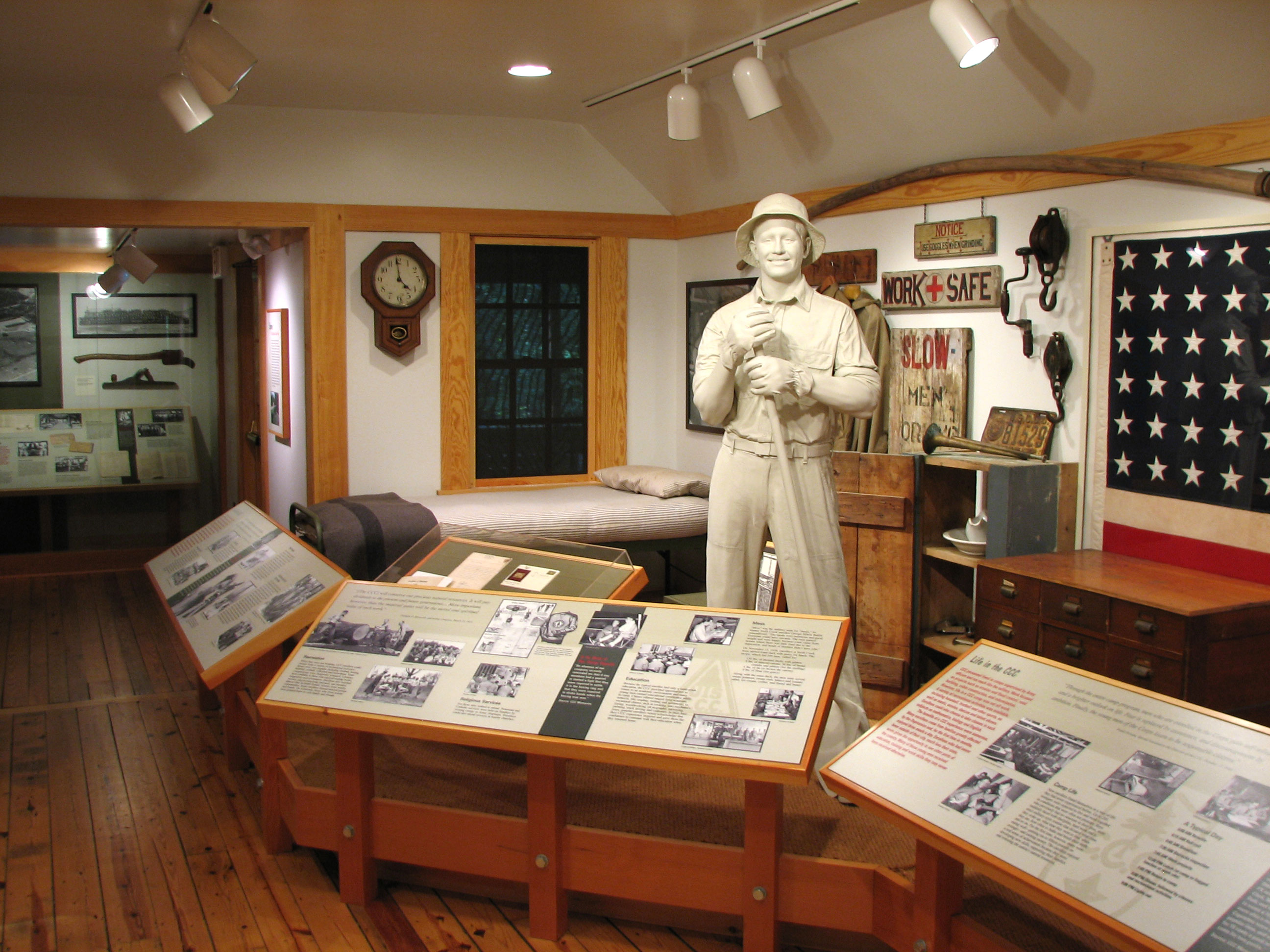 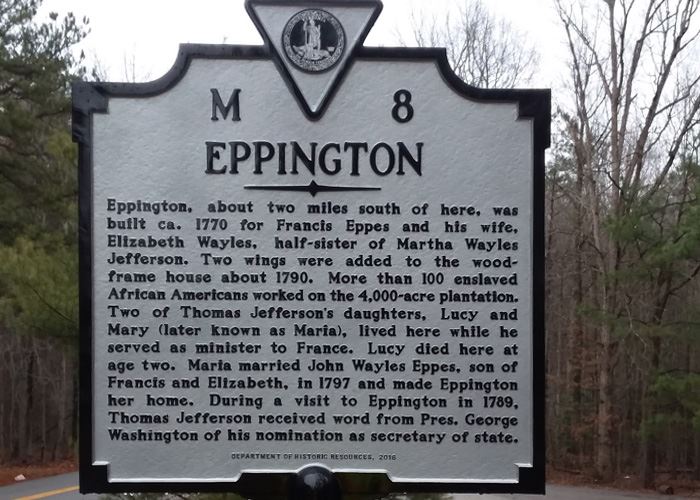 Located at 14602 Eppes Falls Road
Eppington Plantation was built in 1768 by Francis Eppes VI, brother-in-law to Thomas Jefferson. Eppes and Jefferson also were close friends and, after Jefferson’s wife Martha died in 1782, the newly widowed Jefferson entrusted his 2 daughters, Maria and Lucy, to the Eppes family while he served as minister to France. Lucy died of whooping cough shortly thereafter and was buried on the property. Maria grew to adulthood, married the eldest Eppes son and remained on the property until her death in 1804. The house itself is a Chesterfield County Historic Landmark, a Virginia Historic Landmark and on the National Register of Historic Places. It is an excellent example of 18th century Georgian design and features a 3-bay, 2.5-story central block design with hipped roof, dormers and flanking one story wings. Eppington is well preserved and still looks much as it did 250 years ago. 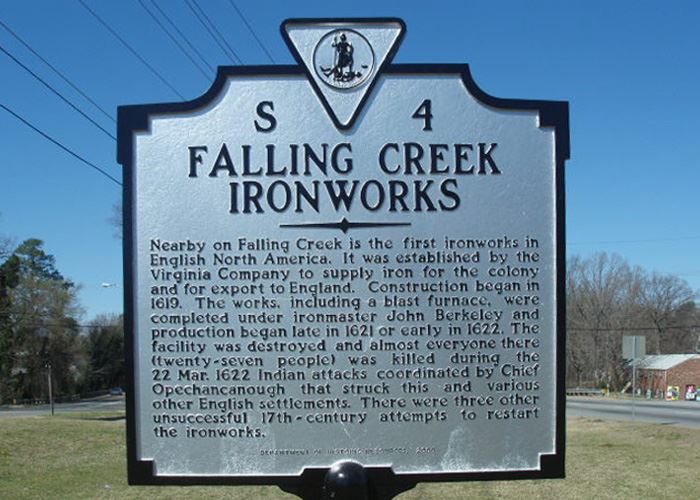 Located at 6407 Route One
The history associated with Falling Creek Park spans over 400 years. From the 17th to the early 20th century it has been well documented that numerous industries once existed along the banks of Falling Creek. The earliest industry at this location was the site of the first iron furnace in the New World. Iron ore was extracted in the area as early as 1608. The Virginia Company of London in 1619 established the first iron furnace and smelting works. The ironworks that would be established was the first in the Western Hemisphere to produce cast iron. This operation combined a blast furnace and refinery forge. 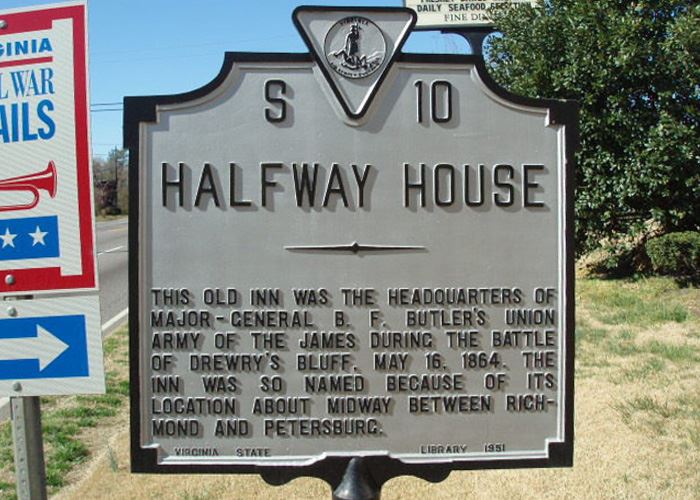 Located at 10301 Jefferson Davis Highway
Nineteenth-century travelers heading south from Richmond to Petersburg would stop at the aptly-named Halfway House for food and lodging, and this family-owned restaurant retains the feel of that period today in its ambience and furnishings. Among its famous guests were the Marquis de Lafayette, Patrick Henry, Thomas Jefferson, Robert E. Lee, Ulysses S. Grant and James Whitcomb Riley. This historic inn still stands along Historic Route 1, operating as a restaurant in the original Manor House, which furnished in authentic antiques.

Located at 920 Mt. Hermon Road
The community of Hallsborough in northwestern Chesterfield County featured a tannery, tavern, general store and post office. The store, built before 1910, is one of the last, and probably the best-preserved, store of its period in the county. The historic store offers a look into rural community life of 100 years ago. It is now home to Gather, which offers fine art, eclectic gifts, accessories and furniture, as well as patio or boxed lunches. 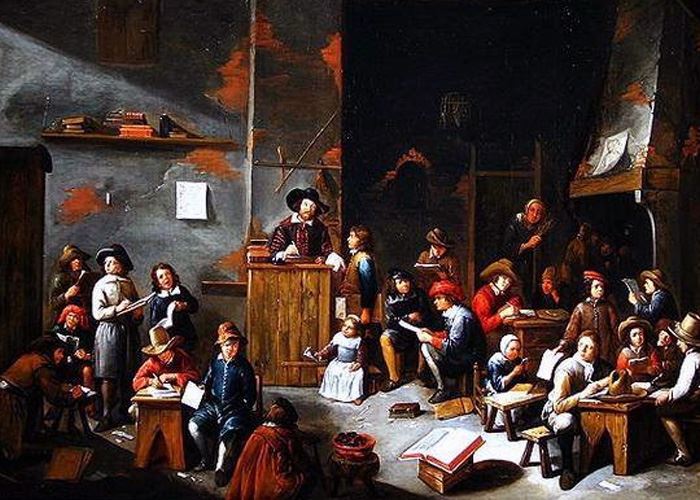 Located at 251 Henricus Park Road
Founded in 1611, the Citie of Henricus is the second successful English settlement in the New World and where the American dream of success and self-reliance began. Historical interpretation and reenactments and educational programs pay tribute to Virginia Indians and the English settlers who carved a nation out of what was then Virginia's western frontier. The site includes 14 re-created colonial structures. 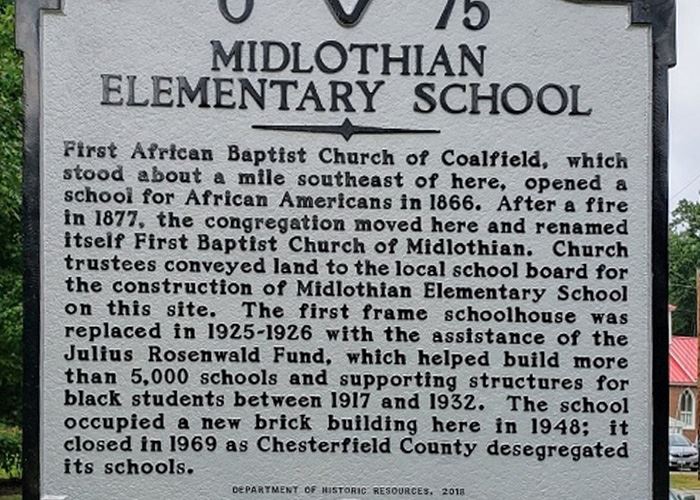 Located at 13801 Westfield Road
The present site of the Lifelong Learning Institute and originally the Midlothian Elementary School. This was the site of the first known public school for blacks in Midlothian built circa 1877 which was a log building on land belonging to the Midlothian African Baptist Church. Prior to 1923 the original schoolhouse was replaced in 1925-1926 by a small frame building made possible by a matching grant funded by Julius Rosenwald Fund. The school occupied a new brick building in 1948 and was used for students until 1994. 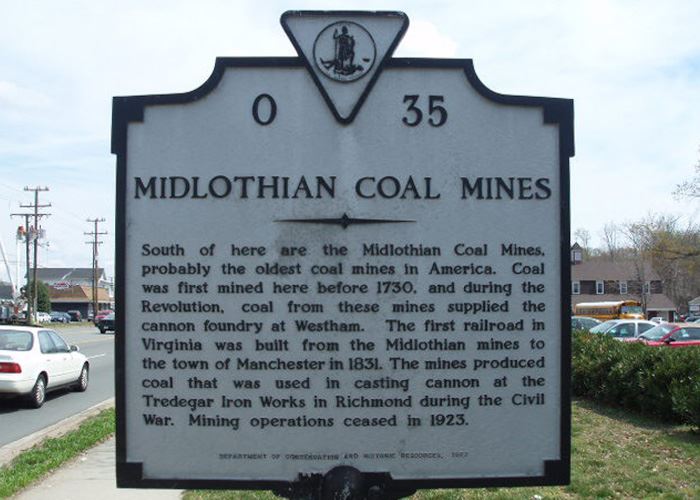 Located at 13301 N. Woolridge Road
Mid-Lothian Mines Park tells the story of the earliest coal mining in America from 1701, when coal was first discovered, to the mid-1730s, when it began commercial production. The first commercially mined coal in America came from Midlothian, where it was discovered near the French Huguenot settlement on the James River around 1701. Coal from the mines here was used to fire the furnaces at Tredegar Iron Works in Richmond. Tredegar was the main supplier of artillery and iron for the Confederacy. 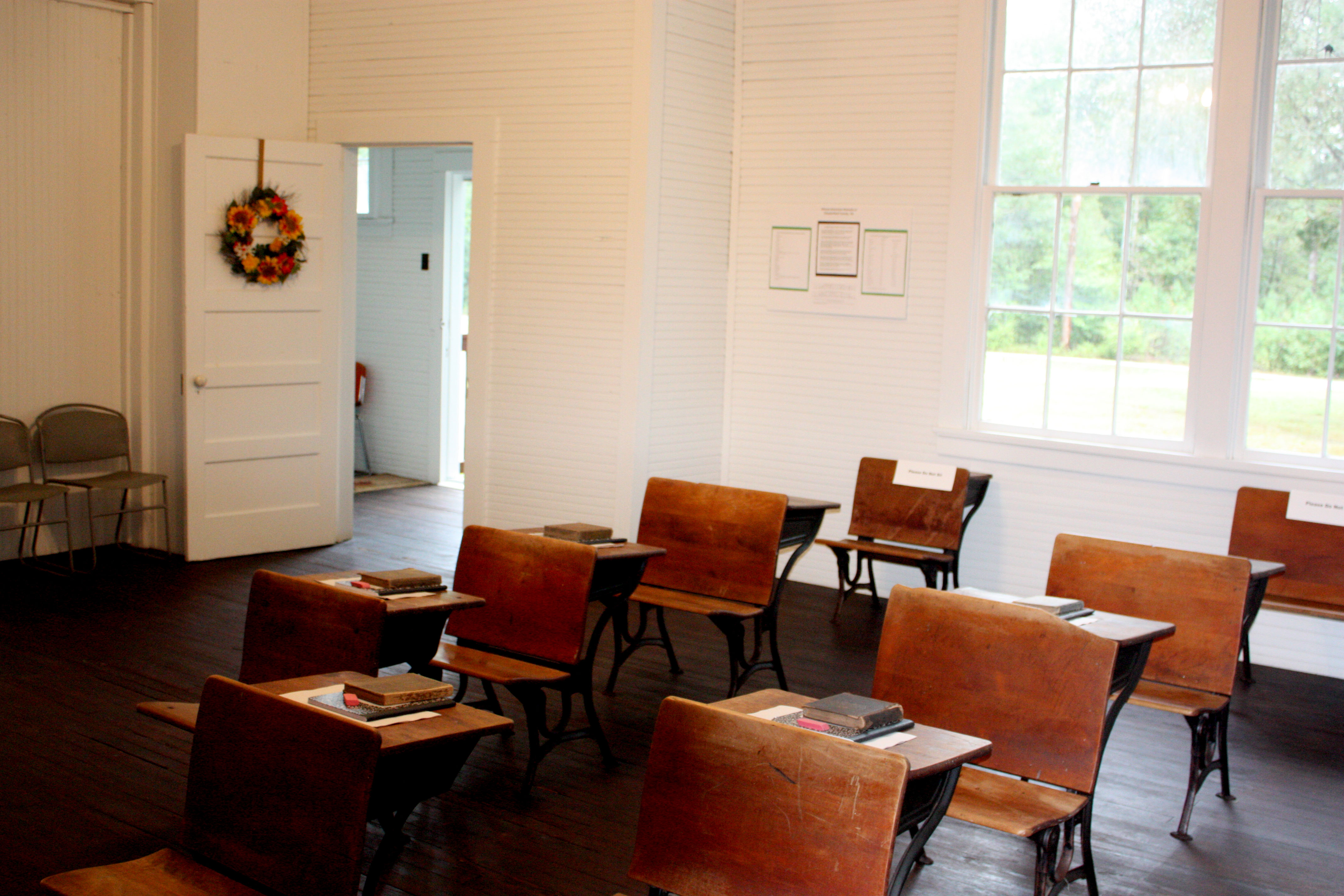 Located at 18431 River Road
Pleasant View is one of the last preserved African American schools in Chesterfield County. Built in 1930, it was used up until the late 1960’s for blacks. The school served as a meeting place for various activities of the black community. The school exhibits many of the same architectural elements of the Rosenwald schools constructed in the deep South. 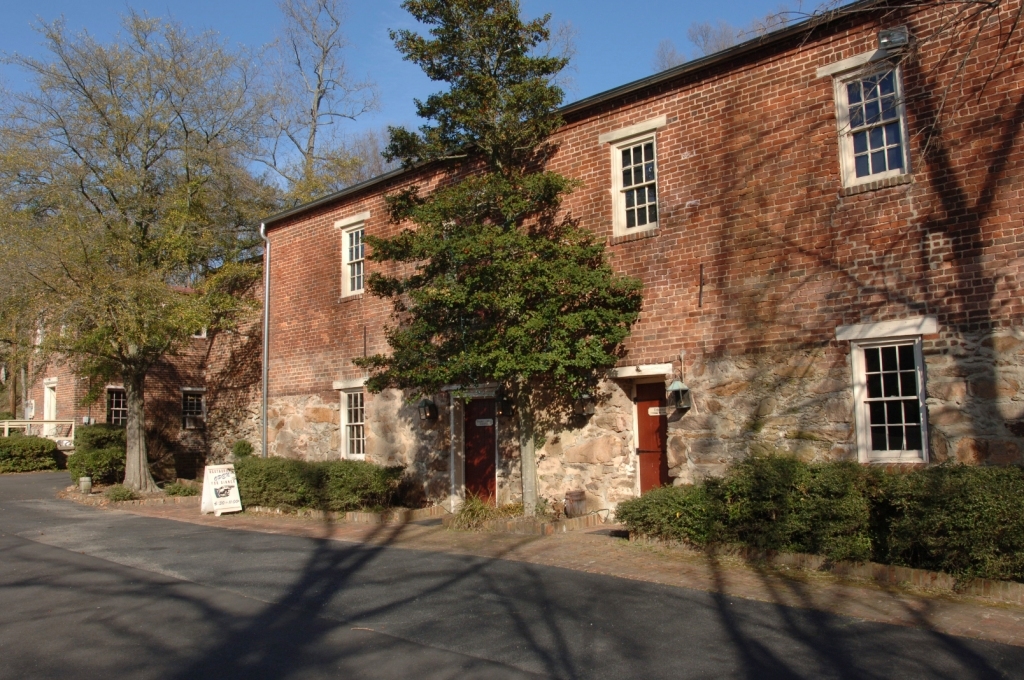 Located at 17401 Jefferson Davis Highway
Swift Creek Mill Playhouse is the oldest grist and flour mill still standing in the count. Built in the 1850s as a grist and flour mill, it was the successor of a number of mills dating back to the mid-1600s. Several features of the mill have been preserved inside the structure. In May, 1864, the mill was the scene of a significant Civil War battle when General Butler’s Army of the James attempted, and failed, to cross Swift Creek. In 1965, the old mill was converted into a restaurant and dinner theater that produces adult and youth shows. The site is preserved as a historical landmark and is listed on the National Register of Historic Places.

Visit the Preservation Committee to learn more about preserving historic resources through our Historic Districts and Landmarks Ordinance.

The following properties are currently on the list of Chesterfield County-designated landmarks: