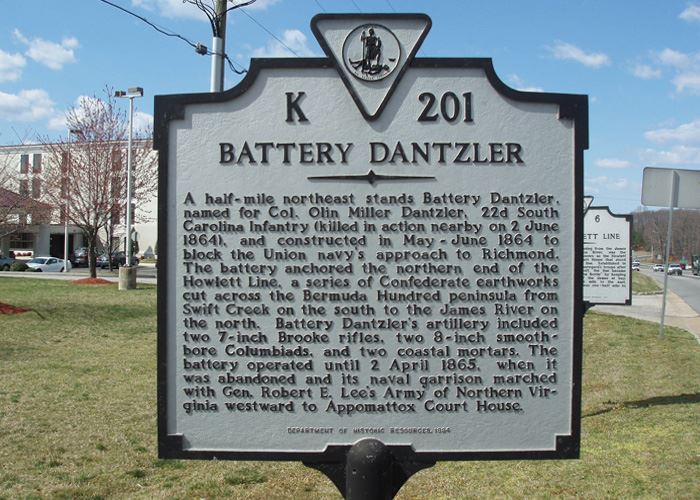 location_on Located at 1820 Battery Dantzler Road
Battery Dantzler is a Confederate battery is the northern end of the Howlett Line that bottled up Butler’s forces on the Bermuda Hundred peninsula. The fort was named for Colonel Olin Miller Dantzler, 22nd South Carolina Infantry, who was killed in action nearby. In Jan. 1865, the Battle of Trent’s Reach, one of the last naval actions of the war, took place at the foot of Battery Dantzler. During the battle, 3 Confederate ironclads were stopped when they tried to force their way downriver to attack General Grant’s supply base at City Point. The site has an excellent view of the old James River channel and a handicap-accessible viewing platform is located near the parking area. 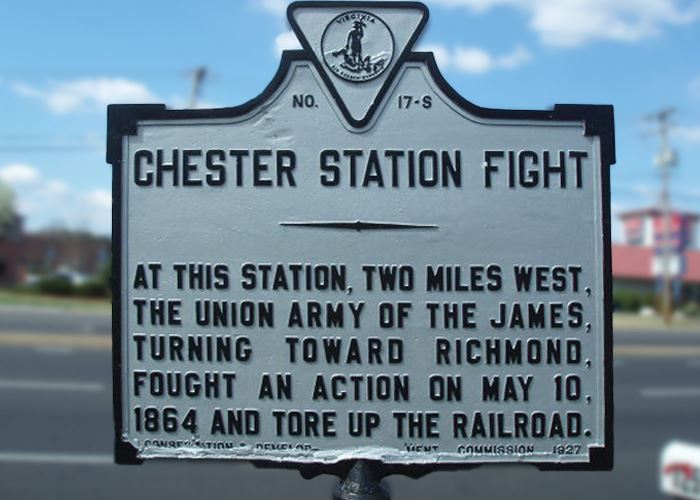 location_on Located at the intersection of Route 10 and U.S. Route 1
Confederate attacks here on May 5, 1864 failed to dislodge Union infantry stationed along the Southern communication and supply line lines from Richmond to Petersburg. Although Union forces held the battlefield, they soon withdrew to Bermuda Hundred and were "bottled up" there. 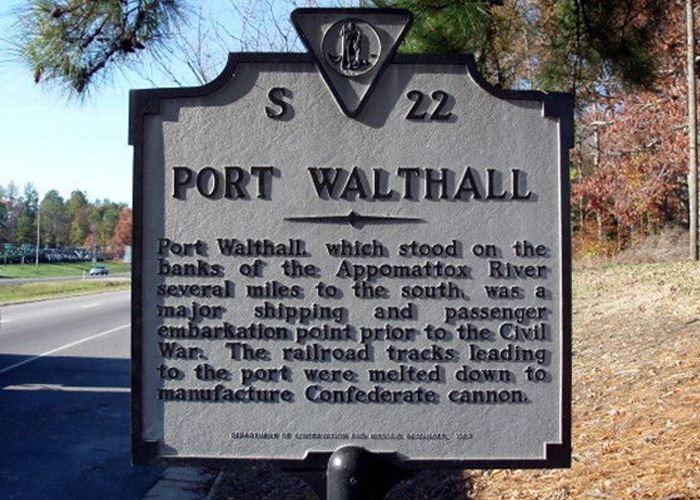 location_on Located at 2126 Ruffin Mill Road
These battles were the first clashes between Union and Confederate Forces during the Bermuda Hundred Campaign. On May 6-7, 1864, Union forces marching toward the railroad that connected Petersburg to Richmond were turned back by Confederate forces at the junction. 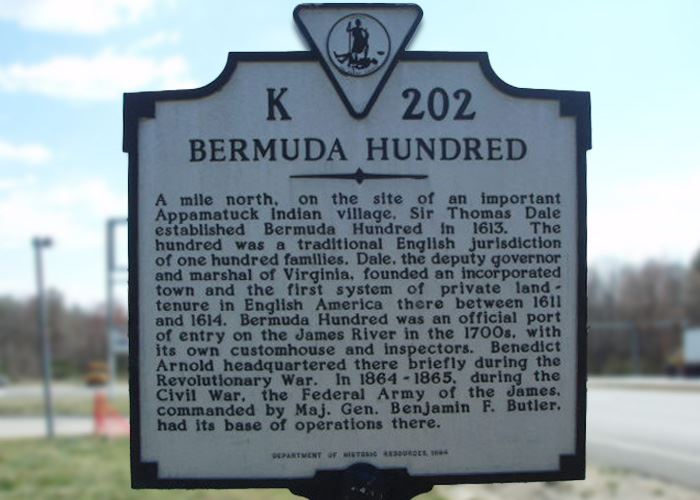 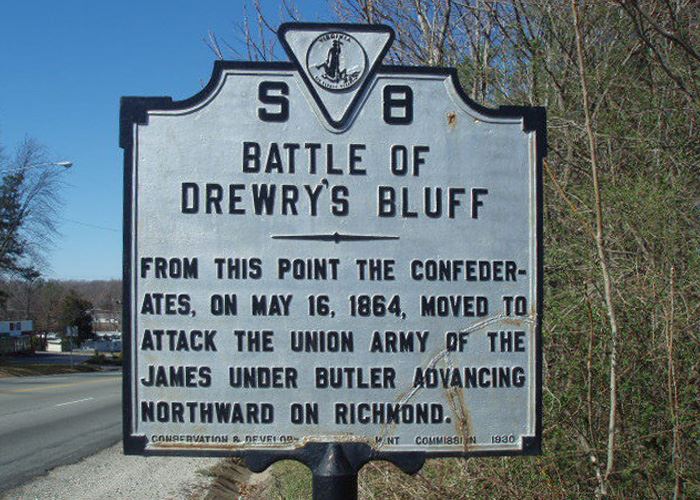 location_on Located at 7600 Fort Darling Road
Constructed between March and May 1862, Fort Drewry, known as Fort Darling by Union forces, on Drewry's Bluff stood as a vital bastion blocking the progress of the U. S. Navy up the James River toward Richmond. A decisive battle on May 15, 1862, permanently ended the Union naval threat to the capital city when defenders defeated the USS Monitor and 4 other warships. Eventually the Confederate States Marine Corps Camp of Instruction and the Confederate States Naval Academy operated at the bluff. Today the fort survives intact, with a 1-mile walking trail and numerous exhibits. A viewing platform offers a sweeping vista of the James River and the May 15 battlefield.

location_on Located at 1011 Point of Rocks Road
This park marks the site of a Union hospital and cemetery that was in use during the Bermuda Hundred Campaign in 1864. The site is where Clara Barton was superintendent to all nurses and cared for wounded soldiers and where President Lincoln visited in March of 1865.

location_on Located at 201 Enon Church Road
R. Garland Dodd Park at Point of Rocks is a 188-acre park that features a diverse natural area and a rich history. It contains the southern end of the Union position during the Bermuda Hundred Campaign of 1864. Remnants of Union earthworks can still be seen along the park road and trails. Point of Rocks Park is part of the Virginia Birding and Wildlife trail. 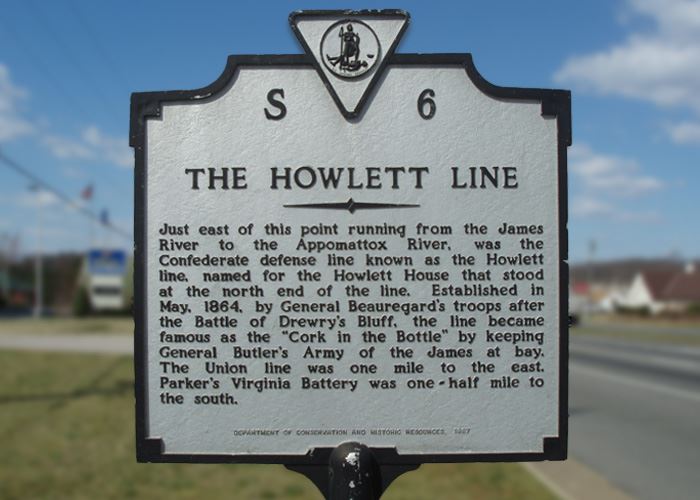 location_on Located at 14100 Howlett Line Drive
Howlett Line Park, named for the line of Confederate earthworks that once stretched for more than 3 miles from the James River to the Appomattox River, still has one of the artillery positions placed along that line. These provided interlocking fields of fire that enabled the Confederates to cover the entire front with a minimum of infantry support. On June 2, 1864, Colonel Olin M. Dantzler led an attack toward a nearby Federal position known as Fort Dutton. Dantzler moved his men to within 150 yards of the Union fort, pushing back part of the 7th Connecticut, before he and 16 of his men were killed.

location_on 1801 Ware Bottom Spring Road
The site features a walking trail with several interpretive signs. Located on the edge of the Bermuda Hundred peninsula between Richmond and Petersburg, this site is a typical stretch of the Confederate Howlett Line that stood from May 1864 into April 1865. Named for the artillery company that defended the spot, Parker's Battery has a short walking trail through original fortifications. A monument commemorates Parker's "Boy Company," most of whose members hailed from Richmond.

location_on Located at 1600 Old Bermuda Hundred Road
Ware Bottom Church Battlefield Park marks the center of the fighting that took place during the Battle of Ware Bottom Church on May 20, 1864. Built with a moat in front, and rifle trench on the back and a wide sloping parapet in between, these works presented a formidable obstacle to attackers. The park contains one of the largest unbroken sections of the Howlett Line still in existence, more than 1,500 feet of well-preserved trenches and artillery positions that were constructed in the months after the battle. 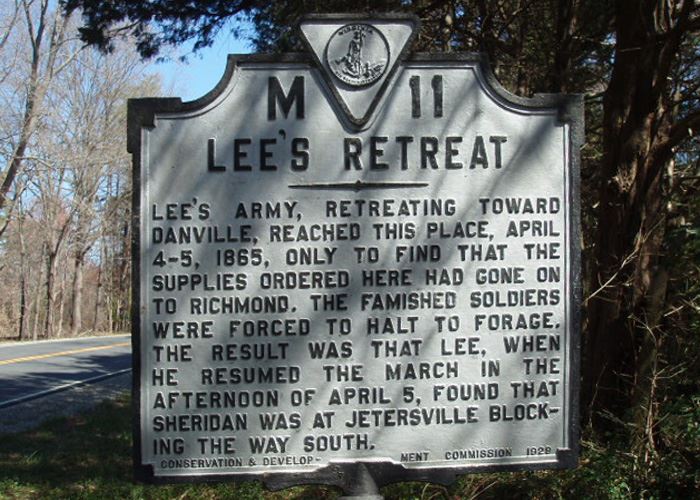 location_on Located at 19301 Hull Street Road
During the retreat from Petersburg, General Robert E. Lee and the bulk of his army crossed the Appomattox River into Chesterfield County. Lee’s army marched through the village of Ettrick and proceeded west along River Road and Hickory Road. Lee and his army crossed the Appomattox River again as they headed west into Amelia County. That crossing took place at Goode’s Bridge, where Hull Street Road (Route 360) crosses today.

location_on Located at 17401 Jefferson Davis Highway
On May 9, 1864, Union troops advancing south toward Petersburg ran into Confederate resistance at Swift Creek. Confederate attacks failed to dislodge the Union line, but General Butler withdrew his Federal forces the next day.

location_on Located at Grove Avenue and Fleet Street
Part of Robert E. Lee’s Confederate army crossed to the north bank of the Appomattox River here the night of April 2, 1865 as he evacuated Petersburg. Lee ordered all the bridges burned following the crossing to impede Union pursuit. This portion of the Confederate army turned west, later re-crossing the Appomattox into Amelia County at Goode’s Bridge.

location_on Located at 8900 Pams Avenue
Fort Stevens was constructed in 1862 after the Seven Days Campaign, as part of the defenses of Richmond. The fort was the pivotal point for a Confederate counter-attack during the Second Battle of Drewry’s Bluff on May 16, 1864, where Confederates halted General Butler’s Army of the James in its advance toward Richmond. This was the largest battle of the Bermuda Hundred Campaign, involving over 35,000 troops.

location_on Located at 1107 Greyledge Boulevard
Fort Wead was constructed in June of 1864 and named after Colonel Frederick Wead of the 98th New York who was killed in action at Cold Harbor. The fort was built in the rear of the main Union defensive line to prevent Confederate forces from advancing in the event the main lines were captured.

location_on Located at 13924 Tobacco Bay Place
Sergeant James Engle Park is named after Sergeant James E. Engle, of Company I, 97th Pennsylvania Volunteers. During a skirmish on May 18, 1864, Engle volunteered to carry ammunition from this area to soldiers at the front. He remained there, distributing ammunition under constant fire, for the rest of the day. Members of his regiment recommended him for the Congressional Medal of Honor, which he was awarded in 1896.